The great and chock-fulla-heart gallery and studio The 100th Monkey Studio put out a call to artists with the subject of maps. I became very inspired and created three small works just for the show. I am happy to say they were accepted, and there is an opening Friday July 9th (Which unfortunately I will not be able to attend!) and will be up through the month of July.

The subject of the three paintings quickly evolved as I started to play with images and maps. I did not intend at first to have a distinct narrative to them. Below is the statement I submitted to the gallery, explaining the meaning of the art and how it relates to the show theme:

"With these three images, I use maps as a way to depict history changing events in U.S. history. They span a hundred years and the breadth of the continental states. The first, “Promise of the Future”, depicts a victim of the dustbowl in the early 1930’s, traveling with her baby to California in hopes of finding work. “After the Shot” is based on a photograph taken minutes after Martin Luther King was shot in Memphis Tennessee, April 4th, 1968. “Before the Crash” is based on a video still of an airplane, just before it hit a World Trade Center building in New York City, in 2001. I am telling a story of the United States, using maps as the medium."

"Promise of the Future" 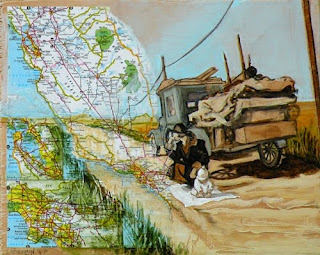 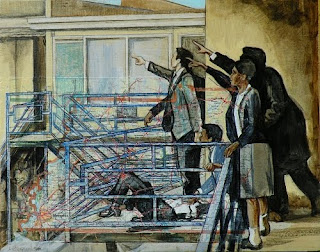 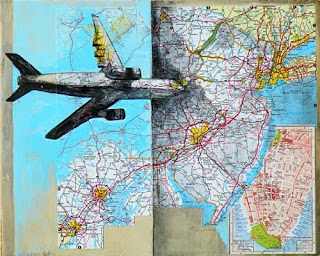 "Promise of the Future" is a wonderful piece! Loves to you - Bridget