“Catharsis” is from the Greek word “kathairein”, meaning “to cleanse, purge.” Aristotle first used this as a metaphor to describe how watching tragic drama can inspire feelings that brings about spiritual renewal or release from tension.

In much the same way someone may like a good war movie or punk rock, yet has no desire to engage in combat or live a chaotic, drug-addled life, many of us achieve a certain catharsis by watching the sufferings of the glamorous figures in a good film noir. 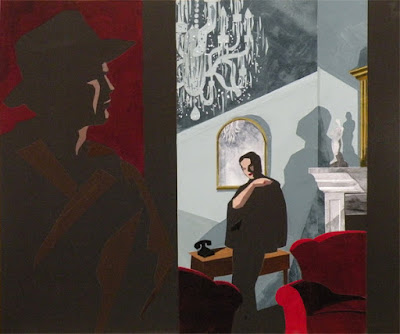 The characters in film noir practice a lot of bad behavior I would never condone. Aside from how much they smoke and drink, they lie, they cheat, they extort and manipulate. I am a person who enjoys a life of minimal drama. Yet it is the drama that I love in film noir! The dream I weave in my pictures is a version of me who is, in a word: clever. Someone who sees through others and can manipulate a situation to her advantage. Very unlike who I really am. But I am utterly uninterested in living a life that would result from being that kind of person. So, I watch it from a safe distance.

In my collage paintings, I use the drama of a noir-esque scene to draw in the viewer not only by depicting figures in evocative, cryptic situations, but by how I organize and compose the image.

In the book “Somewhere in the Night”, Nicholas Christopher describes the noir cityscape as a labyrinth, which reflects the complexity of the movie plot, the inner workings of the protagonist’s mind, and symbolizes the Hero’s Journey into the depths of the soul. 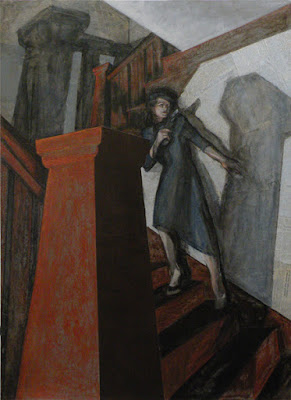 The space depicted in my collage paintings is congested and complicated, sometimes difficult for the viewer to navigate. It is evocative of complicated plot twists and reversals. Lately I have been playing with mirrors, doorways and windows, which I see as apertures into other worlds and realities. The claustrophobic, complex space illustrates the sometimes turgid complexity of our minds and relationships.

The dark, chiaroscuro lighting symbolizes secrets withheld, obscured meaning. Objects and figures that are normally easily identified are shattered and broken down into their essential shapes without superfluous detail. They are transformed, turned upside-down, into something new, special, rarefied.

“The men and women of this sinister cinematic world are driven by greed, lust, jealousy, and revenge—which leads inexorably to existential torment, soul-crushing despair, and a few last gasping breaths in a rain-soaked gutter. But I'll be damned if these lost souls don't look sensational riding the Hades Express. If you're going straight to hell, you might as well travel with some style to burn.

“Today, the cynicism and fatalism found in classic film noir seems almost comforting compared to the ugliness and pessimism we confront in the media, on movie screens, and in the streets. We watch film noir with an endless fascination, and an undeniable aspect of our fascination is the realization that, as a culture, we will never be that stylish again.” 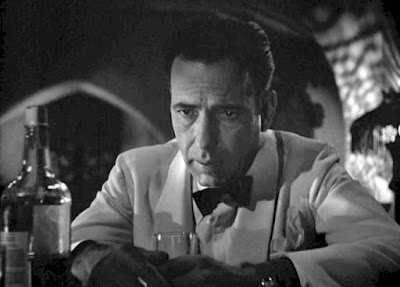 Posted by Leslie Peterson Sapp at 11:53 AM No comments: