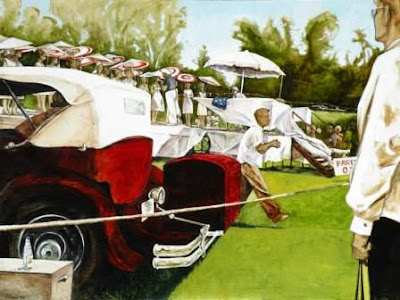 This is a new piece called "Carshow" It comes from a snapshot I found in an antique store. A whole pack of snapshots that were taken, over many years, by someone who's hobby was, apparently, restoring and showing Model T's. Out of all the snapshots in this bundle I chose only two. This one, judging by the boufants, seems to have been taken during the 1960's. I have enjoyed this image so much that months later I went back to the same antique store, hoping to look again at the bundle of snapshots and possibly choose more. But alas, they were gone! I chose the name "Carshow" because obviously, that is what it is, but also there is a sense of irony in the name for me, because it is also a "Woman-show". A beauty pageant along with the car show. What an action packed day!

Here is a few photographs documenting the process of painting this piece. The original photograph is tiny, about 2.5 inches by 3.5inches. The painting is on birch 1/4 plywood, 30 inches by 40 inches. I start out priming the panel with an acrylic ground that has grains of garnet mixed in, to create a rough surface to draw on. Then I start the initial drawing, which is mostly the most exciting part. 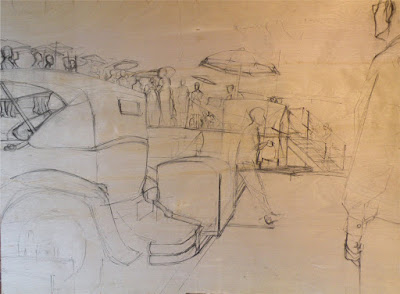 Then I start with thin, large color washes, trying to keep the drawing visible. 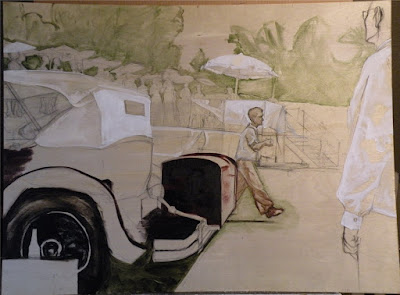 I start to hit some light colors to counterbalance the heavy darks. I had to go slowly with this peice to make sure I did not go on autopilot and simply "fill in" all the minutia and details in the photograph. If I were to do this, the abstract interest in the painting would be lost, and nothing would be left up to the viewer to imagine. 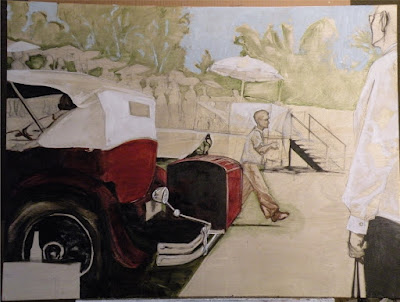 Here you can see I take out the pale square object in the lower left corner. (I think it is a cooler with a bottle sitting on top of it!) It was simply too distracting to keep in. I also finally put the divider rope into the image. I love the way it cuts dramatically across the picture plane. My partner Jim is opposed to the rope. He thinks it distracts. I often find his opinion is astute and often follow his advise. Not this time. The rope controversy rages on. In the finished peice I did make the rope more subtle and thin. In this picture, in case you didn't notice, I have removed a square white object in the lower left corner. I thought it was too distracting and drew the eye to it too much. In the final version (up top) I decided to put it back! A lot of scraping, scratching, sanding and re-painting. I also realized it was probably a Millier High-Life bottle.

Posted by Leslie Peterson Sapp at 3:43 PM 3 comments: Links to this post