The wonderful people at RiverSea Gallery came up with a great idea for a show- " Ephemera: Imagined Memorabilia of Astoria", a collection of small works based on imagined memorabilia of a past, present or future Astoria.
For this invitational group show I created three special pieces, all 6"x8", depicting imaginative postcards based on actual events in Astoria's colorful past.
Inspired by the tag lines and slogans on traditional travel posters, I visualized postcards commemorating events that are not usually the stuff of promotional campaigns and depicted them as though they were perceived as being as noteworthy and exciting as a major tourist attraction or event, such as a World's Fair or The Grand Canyon.

On the front of each one is an original painting, based on a historic photograph. On the back, I added a vintage-looking postcard reverse, with a short note written as though the postcard had been written upon and sent to you, the viewer. 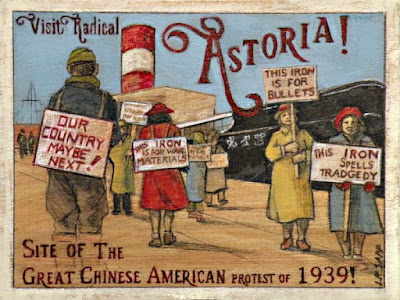 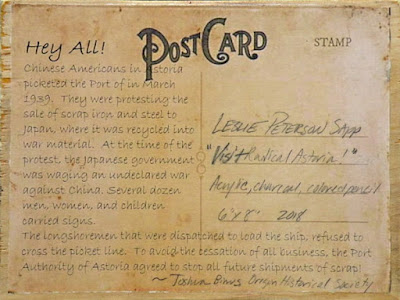 This one is based on a very courageous protest by Chinese American residents of Astoria in 1939. They were protesting the sale of scrap iron and steel to Japan, where it was recycled into war material. At the time of the protest, the Japanese government was waging an undeclared war against China. Although it is a very somber subject, I depict it as if it is regarded by the postcard sender as a joyous incidence of morality triumphing over profit.
To read more, click onto The Oregon History Project. 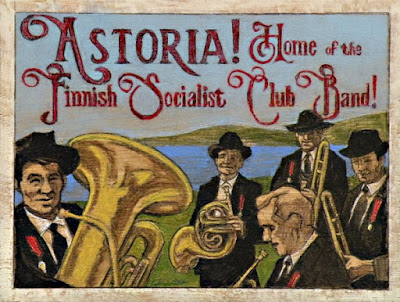 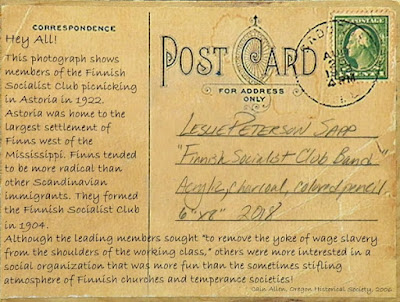 This one is commemorating the fact that being a Socialist wasn't such an obscure position at one time, and that Astoria was a hotbed of radical, populist politics. I loved the name of this brass band, and it perhaps reminded me of Sgt. Pepper's a bit!
To read more, click on over to The Oregon History Project. 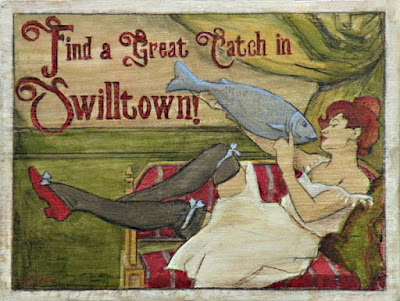 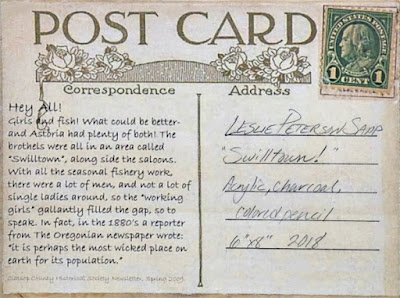 Last but not least, this is an imagined postcard commemorating Astoria's historical red light district, sometimes referred to as "Swilltown" because of all the saloons. Although the glamorization of prostitution is a moral tangle, there has been a long tradition of sex workers of all stripes defying authority, demanding their rights, standing up for the underdogs of society.
To read more, visit The Clatsop County Heritage Museum.
Posted by Leslie Peterson Sapp at 3:07 PM No comments: 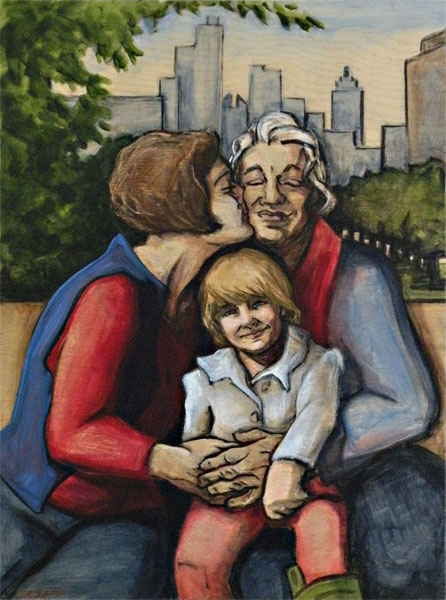