If you recall my adventure at the Bull Run Art Jam last spring, I came across some old blueprints in the control room of the Bull Run powerhouse and became very inspired. With the help of historians at PGE I was able to procure a few blueprints of the powerhouse and painted a picture on top of it. This has set off a new direction in my art. I am starting to integrate collage elements in my work.

This painting is "Celilo Canal and Mt. Hood" based on a 1940 photograph from the Oregon State Archives. 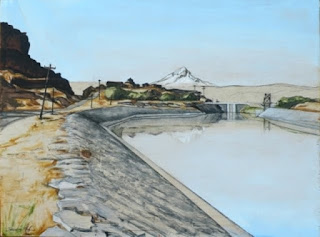 Here is the same image, only over a blueprint. This piece was purchased by a professional land surveyor, with an enthusiasm for blueprints. 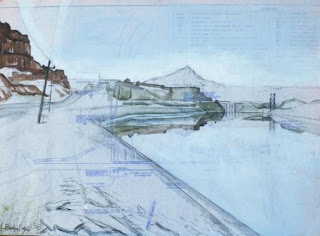 This is a piece named "Develop". The blueprint is from the archives of my father's engineering practice, Peterson Structural Engineers . It is from a long time ago, and he has no recollection of the specific job. The photograph I found at an antique store. 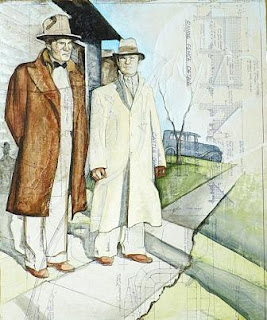 "Squares Make a Building" is on a floor plan I found in the trash. The photograph I found in an antique store. I like the way the squares emerge faintly from the scene. 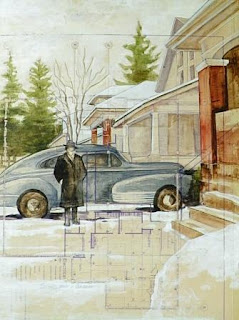 This is a special painting that I suspect will be the first in a series of sorts. The newspaper (The Oregon Journal) was saved by my paternal grandfather. The boy in the photograph is my own father. The date of the newspaper is also the title of the painting: "September 27th, 1939" I suspect that is also about the time the photograph was taken. Dad says he thinks this was taken on a ferry to Port Orchard (near Bremerton and the Puget Sound Navy Shipyards are located) where his father was from.

The matching up of collage piece to photograph is an intuitive process that leads to meanings that are more rich, obscure and personal.
Posted by Leslie Peterson Sapp at 11:12 AM 3 comments: