The Land of the Lotus Eaters

So off they went and soon enough
they mingled among the natives, Lotus-eaters, Lotus-eaters
who had no notion of killing my companions, not at all,
they simply gave them the lotus to taste instead …
Any crewmen who ate the lotus, the honey-sweet fruit,
lost all desire to send a message back, much less return,
their only wish to linger there with the Lotus-eaters,
grazing on lotus, all memory of the journey home
dissolved forever.
The Lotus Eaters is another brief but well known episode in The Odyssey, and takes place on one of the many islands that Odysseus and his crew stop at, and they barely escape. Not because of a fighting foe, but because a potential pitfall of basic human nature.

Most of the time people interpret this scene with two meanings; either The Lotus Eaters people who are lost in drug addiction, or people who have rejected society’s requirement to work, or strive, to achieve, and they live in the moment, at peace and one with nature. There is a famous Tennyson poem about it. Here is a link to an essay by Mike Jay about how the The Lotus Eaters symbolizes a rejection of over work, progress, colonization, imperialism.

I have a pretty unconventional version of the Lotus Eaters in this series, in fact, you could say I took a flight of fancy to a meaning no one else, as far as I know has arrive at.

When I start working with an image, I often start with a google search of images, to see who else out there has painted the scene and how they interpreted it, how they dealt with the space, the positioning of the characters, etc. When I did a search for the Lotus Eaters I ran across some pretty unexpected images.

Some were connected to The Lotus Eaters, a new wave band from the early 80’s. They were one of the very earliest bands that were ascribed a gay identity. 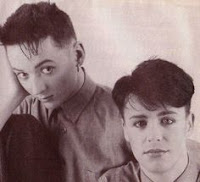 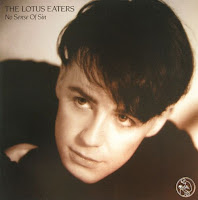 Along the same lines I came across the a Yaoi graphic novel series called The Lotus Eaters. Yaoi is a genre of graphic novels and fiction from Japan that focuses on same-sex romances between boys (but produced for a female audience). From these things I made a leap from The Lotus Eaters being a symbol not only of the rejection of work and strife to being a rejection of the masculine compulsion to prove one’s masculinity. What if the incident is a fable for men’s’ constant anxiety to appear strong, capable, macho, and above all, not gay? What if the horror of being perceived as gay is enough to compel one another to never even touch on that isle for fear that once you taste it, you’ll never escape?

But I brought them back, back
to the hollow ships, and streaming tears—I forced them,
hauled them under the rowing benches, lashed them fast
and shouted out commands to my other, steady comrades:
'Quick, no time to lose, embark in the racing ships!’—
so none could eat the lotus, forget the voyage home.
They swung aboard at once, they sat to the oars in ranks
and in rhythm churned the water white with stroke on stroke.” 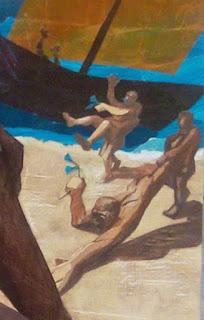 To me, this scene also has a great deal of humor to it. I love the image of grown up tough guys being dragged away, tears streaming down their faces, like children who don’t want to leave a playground. I think it is funny that these men, so adventurous and brave, would cry over something like that. I love that they simply forgot all about the important mission they are on, and didn’t care anymore.

I think Odysseus’ reaction is hilarious; “Quick! No time to lose! Let’s get the heck outta here before anyone else eats these flowers!” He knew that if too many of his men tasted the flower, his plans to return to Ithaca would be doomed. 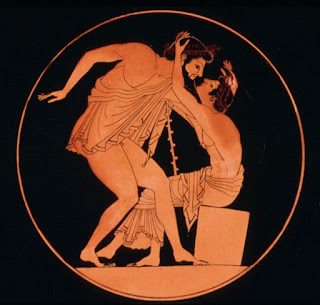 Posted by Leslie Peterson Sapp at 3:17 PM No comments: