An Inspiring Trip to Greece!

My husband and I took a trip to a place I've wanted to go for a long time- Greece! We visited mainly Napflio and the Peloponnes Peninsula, the island of Hydra, up to Delphi, then Athens.

Some of you may remember that I love ancient history, and that I did a series of art based on The Odyssey. It was sensational to be in and around the place where The Iliad and The Odyssey was conceived, sung, shared, and eventually written down. In fact, we visited the ancient site of Mycenae, which was the palace complex where Agamemnon himself lived and ruled.
(If you'd like to see some of the inspiring art I saw during my trip to Greece, check out my post on my facebook page.)
Being in Greece lent depth and richness to my understanding of The Odyssey. One experience I had was the realization that my conception of the space and atmosphere was generalized and lacking in sensitivity. It was fanciful, but vague.
The sense I have now is the astounding ruggedness of the place, how rocky mountain slopes charge down and continue deep into the sea.
I also did not have a sense of the palette. These parts of Greece are dry dry dry, and the rocks are pale and crumbly. I suppose the pale rock is part of why the sea is so green-blue.
The artist whom I can think of who really got a great take on what it feels like to be a westerner, idealizing ancient Greece, is Puvis de Chavannes, a French artist active in the late 19th century.


Also, Picasso captured it, perhaps with more individuality and sophistication, in many of his early works:

Although I am committed to doing more Film Noir works for the time being, I am wondering what will transpire if I decide to do more Ancient Literature work in the future. One very inspiring object I saw during my travels is a late Hellenistic funerary urn at the Archeological Museum. 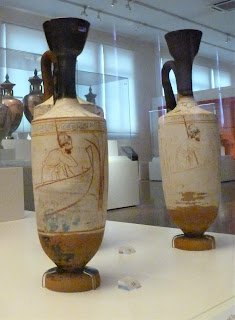 
Posted by Leslie Peterson Sapp at 9:00 AM No comments: