Is Dawn a woman's name?

Or it could be the time of day?

Or is it the beginning of an ill fated romance?

Could it be all three?

Dawn is based on a vintage photograph, and went through interesting changes. The developmental drawing and the miniature version of this piece is lit from the front and you can see the detail of the car and her face. 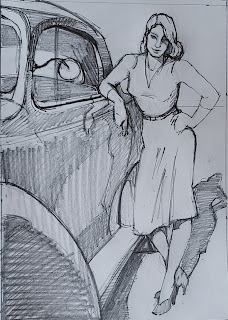 But when I laid down the paper for that sky, I found her silhouette alone was so riveting it seemed wrong to mar it with detail. This piece screamed “less is more”! So I turned the sun around so it looked like it has just below the horizon behind her. Notice the different shadows in each; one is in front of her, the other behind her. I used subtle paint to put just enough to indicate forms without describing them.

Below is a little bitty video about Dawn, filmed during my opening RiverSea Gallery where I discuss the techniques used to create pattern and effects.

Posted by Leslie Peterson Sapp at 5:56 PM No comments: