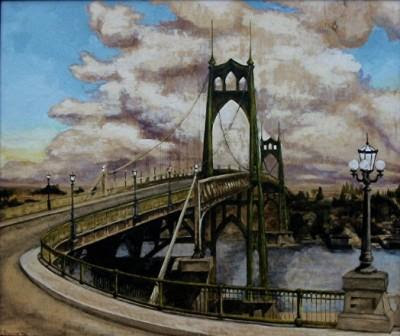 "St John's Bridge" 32"X38" Acrylic on illustration board, mounted on panel. April 2008.
This image is based on the same black&white photograph by Ray Atkeson. The first version was done on illustration board, and this version was done directly on birch panel. Sometimes I need to paint an image several times to fully investigate everything I want to learn from it. NFS.
Posted by Leslie Peterson Sapp at 9:04 AM

interesting color contrast with #1. I would need to see them en vivo to compare. Such a great subject. You should run this by Bridgeport; I think it would look great at the pub.